Solvents are very important for many applications in the chemical industry, (bio)medical and pharmaceutical industry, as well as in upcoming biorefineries. Solvents are used both as reaction media and fluid separations, and within the Sustainable Process Technology (SPT) group, solvent-based fluid separations have been one of the special interests since Boelo Schuur joined the group in 2011.

The solvents used for separations can be classified as follows:

The classification according to these solvent classes is illustrated in Figure 1, where it can be seen that in most of the solvent classes, both molecular liquids and ionic liquids are to be found. As for organic solvents, it is known that ionic species can be dissolved in a molecular diluent, the diluent is the dominant factor governing the properties, and in this class it is defined that the diluent is not ionic of nature. Similarly ionic liquids are by definition not molecular by nature. Furthermore, except for eutectic systems and gas expanded solvents, by definition comprised of at least two components, all classes contain single compounds and mixtures. It is possible to obtain solvents from bio-based sources, either directly or in a derived form.

Although you can simply mix molecules to make a DES, you should also consider the costs to make the constituents

Where the boom in the oil industry in the twentieth century has made many organic solvents available at low prices, research interests shifted around the turn of the century, and a large ionic liquid (IL) hype was formed. For many existing and new separation challenges ILs were investigated. It was around 2011-2016 that next to some great results, also a lot of people dropped their interest in ILs, as the ILs turned out not to be the magic solvents to solve all problems. However, it still is definitely one of the most important research and development area(s) for many separations. Where some directions with ILs have shown to be less interesting, others are highly exciting and have aged now to a stage where the first commercial applications are seeing the light of day[3]. SPT-group experiences include an example where despite good results [4] the ILs were eventually not the best solution. This was in the recovery of volatile fatty acids from fermented wastewater, where an adsorption process was much simpler [5], while recovery of the acids from the IL turned out to be quite a challenge. Exactly this type of challenge, solvent recovery after the primary separation, is what is included in the studies done in SPT. It is essential that the recovery works, otherwise no solvent is sustainable.

DESs (and sometimes natural DESs, NADESs) have often been named as cheap alternatives for ILs, but it is highly important to realize that DESs are not always cheap, because although you can simply mix molecules to make a DES, you should also consider the costs to make the constituents. Furthermore, they are not one-on-one replacements of ILs, as ILs are pure substances comprised of cations and anions, while DESs are mixtures. This has great impact on the process, as for DESs there is no restriction to partitioning behavior due to charge balance as there is with ILs, it is of key importance that partitioning of all constituents is studied. This does not have to be problematic, but it can be. In recent work on regeneration of a DES comprised of lactic acid – choline chloride, it was found that the lactic acid leaches in extraction processes much more than choline chloride, impacting significantly on the eventual process design, but without critically hampering its application [6, 7].

For other situations, leaching of one component may be critical, as the shift in composition may lead to solidification. NADESs can be seen as composite bio-based solvents, while a wide range of single molecule bio-based solvents (BBSols) are also accessible. BBSols can be made by fermentation, such as ethanol and lactic acid, but also through chemical modifications from (ligno)cellulosic biomass. An example of a BBSol derived from cellulose is dihydrolevoglucosenone, commercialized as cyrene by the Circa Group (see Figure 2; pyrolysis is not displayed stoichiometrical as byproducts are also formed).

Cyrene is a polar, non-protic solvent, a class of solvents that is important in numerous application fields, including polymer syntheses, membrane manufacture, but also fluid separations. The fossil-based sulfolane, N-methyl pyrrolidone (NMP) and N,N-dimethyl formamide (DMF) are used in many applications, including separations of hydrocarbon streams, such as aromatics and aliphatics (in naphtha) and olefins and paraffins (e.g. the C4-splitting processes of BASF and DuPont with NMP and DMF, respectively, to fractionate butadienes and butenes from streams also comprised of butane and propane). NMP and DMF are substances of high concern, and replacement by a bio-based solvent which is a relatively unharmful substance, would be a great step forward to a cleaner process. After initial publication of the vapor-liquid equilibria for toluene and methylcyclohexane (MCH) [8], and liquid-liquid extraction (LLX) of various systems [9], a more complete comparison for toluene and MCH separation process costs using LLX showed that at feed compositions with more than 30% toluene, the use of cyrene is economically more attractive than the use of sulfolane [10] (see Figure 3 for a comparison of the process costs). These estimates are based on projected cyrene costs of € 2 per kg at commercial scale production volumes [10], and at Circa Group they are currently building a 1000 ton per year plant to take a good step in that direction (Horizon2020 project ReSolute). 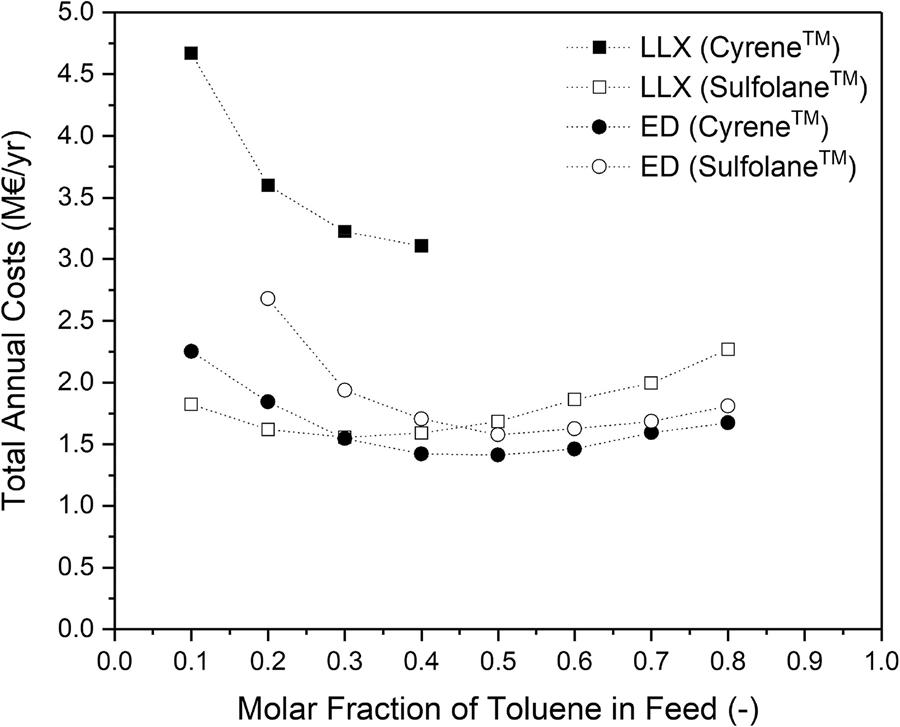 Current SPT-group studies show that for the splitting of olefins and paraffins, it is much harder to obtain a cyrene-based process that can compete with NMP, which is unfortunate because NMP is of much higher concern than sulfolane. At SPT a continued search for bio-based alternatives for NMP is ongoing, and so we again see that there is not a single solvent that is always the best solution. Next to NMP replacement, development of biorefineries and recycling processes making use of sustainable solvents will be on the agenda for the coming years of research at SPT.

Biobased solvents are currently one of the main interests of Boelo Schuur, and after 10 years in Twente, he looks back at his scientific career in Separation Technology. "I had my first experience with biobased solvents early, namely during my education at RU Groningen, where bio-oils were made through pyrolysis. After my studies, I moved to Eindhoven to work with André de Haan on a variety of separations using ionic liquids (ILs) in many studies. In 2011, I moved from Eindhoven to Twente to the Thermo-Chemical Conversion of Biomass group, which had a focus on pyrolysis of biomass, a topic I was acquainted with in Groningen. A logical step was to combine the bio-oils with my expertise in extraction and ionic liquids (ILs), so we started to investigate the fractionation of bio-oils with ILs. The work was done in close cooperation with Michel Eppink and Frans Leermakers from (WUR) and supported by a NWO Smart Separations Grant. An interesting research area was the fractionation of proteins and pigments from micro-algae using multiresponsive pickering emulsions, a topic in which all three research groups were actively involved. While the group changed name to Sustainable Process Technology (SPT) in order to become more general, biorefinery work has remained an important topic, while more recently recycling of polymers and metals have become topics of interest as well. For these and other topics concerning separation, I am investigating the possible use of biobased solvents, aiming to reduce the dependency of fossil oil-based solvents."